Mahjong Solitaire has become one of the most popular games in the world because of its simple rules and engaging game play. Mahjong Solitaire is the single player version of Chinese Mahjong (which is commonly played by 4 players). In the solitaire version, your goal is to remove every tile by matching pairs of identical Mahjong tiles.


Your goal is to remove every tile by matching pairs of identical tiles. You can however only match "free" tiles. A tile is "free" when there are no tiles on top of it. In addition, either its left or right side needs to be open. Basically, the tile needs to be able to slide out without anything blocking it on a side or on top.

In the image below, the dark tile is locked, and cannot be matched yet while the other 5 tiles are free:

After matching a pair of tiles, tiles that were "locked" down by that pair will be opened up and become free, allowing you to match new tiles. Notice below, after matching the two tiles on each of its sides, the locked tile has become free:

You complete the game once you have matched every tile on the board, trying to avoid getting to a situation where there are no matches available. If that happens, the game is over.


If you want to learn some tips and tricks on how to play Mahjong, check out Mahjong Tips & Tricks. 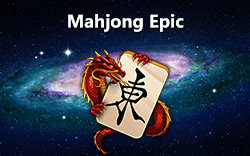